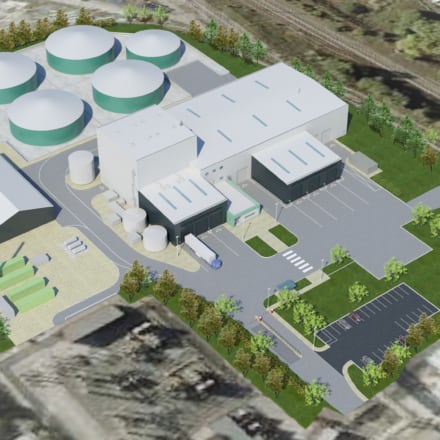 A world first bio plant for handling unsorted household waste will be built in Cheshire by DONG Energy.

It will be the first bio plant in the world to handle unsorted household waste, without prior treatment, using enzymes. The ground-breaking new technology, called REnescience, has been developed by DONG Energy and tested at a demonstration plant in Copenhagen since 2009.

Now the world’s first commercial full-scale plant will be built in Northwich, meaning a much larger proportion of UK household waste can be recycled and converted into biogas energy.

DONG Energy will finance, build and operate the plant, which will be operational in 2017.

Around 150 people will be involved during the peak phase of construction, with an average of 75 at any given time. The plant will also require around 24 full-time local employees to operate it.

Brent Cheshire, DONG Energy’s UK Country Chairman, said: “It’s fantastic to see the world’s first bio plant of this type being built in Northwich, underlining the UK is once again leading the way in renewable energy. This new plant also highlights our commitment to investing in the Northern Powerhouse.

“REnescience is a brilliant new technology and generates as many resources as possible from everyday household waste. This new bio plant will see us handling waste in a much smarter way.”

The REnescience plant in Northwich will be able to receive unsorted household waste, which – through enzyme treatment – will be converted into biogas as well as recyclable plastics and metals. The biogas is converted to green power via gas engines.

The plant will have an annual capacity of 120,000 tonnes of waste, which is equivalent to the waste from almost 110,000 UK households. The waste will be supplied by the UK waste management company FCC Environment, which already collects household waste in the Northwich region.

The design and planning of the plant in Northwich has been completed, and the site has been awarded planning permission. DONG Energy expects construction work to begin in February 2016, with the plant being commissioned in early 2017.