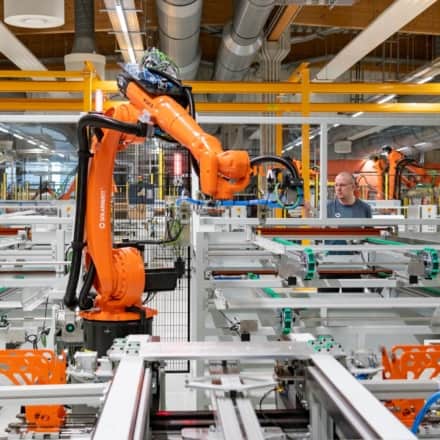 Last week saw the inauguration of Europe’s largest production facility for glass-glass solar modules by Solarwatt in front of 40 guests in Dresden. The first modules produced will be delivered to customers next week. In addition, two new production lines for energy storage were officially opened during the event. In addition to Saxony’s Prime Minister Michael Kretschmer, many representatives from politics and business took part in the celebrations.

For CEO Detlef Neuhaus, the opening of the production facilities is an important milestone for the Dresden-based company: “The demand from customers for photovoltaic solutions for private homes and the commercial sector is increasing more and more – not only in Germany but all over the world. That’s why it’s extremely important that we also have a strong solar industry in this country that drives innovation and offers solutions that enable people to supply themselves with clean energy as quickly and easily as possible. In this way, we not only ensure that climate targets are met, but also create jobs in one of the most important technologies of the future.”

Solarwatt’s main shareholder Stefan Quandt also sees the expansion of production as a clear signal that the company will consistently continue on its chosen path: “Decarbonisation, i.e. turning away from carbon and towards a CO2-neutral economy, is the big issue of our time – and a Herculean task.

“Without powerful and intelligent photovoltaic systems, the conversion to a CO2-neutral economy will not succeed. Against this background, we are firmly convinced that Solarwatt is excellently positioned for the future. We are seeing the results of realigning the company a few years ago to become a systems house with the core competencies of ‘generating energy’, ‘storing energy’ and ‘managing energy’.

“Solarwatt is the only European supplier to produce all the components of a photovoltaic system itself and from a single source – here in Germany.”

The company has also laid the foundation for further advancing the coupling of the energy, mobility and heat sectors, explains CEO Detlef Neuhaus: “The potential for CO2 savings through sector coupling is huge. A homeowner who operates an electric car and a heat pump with a photovoltaic system and an energy storage system reduces his own CO2 emissions by up to 90 percent.”

Saxony’s Minister President Michael Kretschmer: “Solarwatt has written an impressive success story in Dresden. Through innovations and smart investments, the company has grown from an industry pioneer in solar module production to a system provider for intelligent energy solutions. Photovoltaics and intelligent systems are key technologies for the success of the energy transition. The commissioning of Solarwatt’s new production lines is another important milestone for Saxony as a photovoltaic location.”

The new F8 solar module production facility has a floor area of around 3,500 square meters and a production capacity of 300-megawatt peak per year.

“We produce around one million modules a year in the new production facility. This will enable around 80,000 households to be fully supplied with green energy,” emphasises Detlef Neuhaus.

Since 1998, Solarwatt has been developing photovoltaic panels in which the electricity-generating solar cells are protected from the front and back by a stable glass pane. The company is now the European market leader in this glass-glass technology and exclusively manufactures glass-glass solar modules in Dresden. This makes the solar panels significantly more robust and durable than conventional glass-foil modules and, thanks to the two thin glass panes, only two millimetres thick, the modules of the latest generation are very light with reliable electricity generation.

Solarwatt is also using larger cell sizes in the new F8, which allows the company to increase the power classes of the modules. The unique 30-year product and performance guarantee remains.

In the immediate vicinity of the new F8 module production, a modern energy storage production facility with a size of approximately 2,500 square metres has recently been built. This is where the final assembly of the SOLARWATT Battery flex energy storage system, developed together with the BMW Group, takes place.

Solarwatt obtains original components, such as the battery cells, directly from BMW for production. These are also used in the global corporation’s electric cars. Webasto, an international automotive supplier, manufactures the cell module for Solarwatt’s energy storage system in Bavaria. This new production facility, which is also the third, has a floor area of around 300 square meters and produces a cell module for Solarwatt in around two minutes. Production in the two energy storage manufacturing facilities already started at the beginning of September with the highly efficient electricity storage systems offering the right solutions for charging an electric car or powering a heat pump simply and efficiently with the solar power generated by a PV system.

“The first storage units will be delivered to our customers in the coming weeks,” confirmed the Solarwatt CEO.