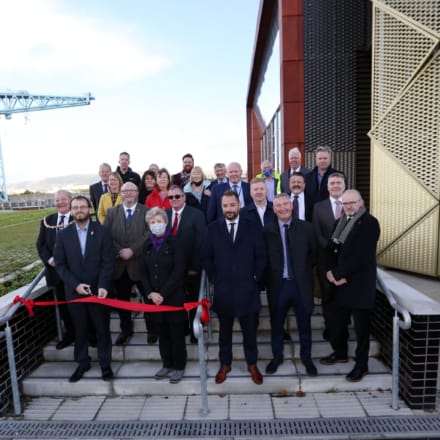 The opening is a particularly timely showcase of Scottish innovation as world leaders are set to gather in Glasgow for the COP26 United Nations Conference.

At full build-out, the project will deliver circa 5,705 tonnes of CO2 reduction per year due to grid decarbonisation.

Scott Lutton, Vital Energi’s operations director for North and Scotland, said: “With COP26 fast approaching, it is timely that we showcase the local authorities who have successfully delivered initiatives to meet their carbon targets and are an inspiration to others. West Dunbartonshire Council has shown that it is possible not only to deliver large carbon reduction by harnessing renewable technology but that this heat can be delivered at a more affordable price.

“One of the truly exciting things about this development is that it will continue to grow over multiple phases, increasing in scale, becoming more efficient and allowing more people, businesses and organisations to access low-carbon heat.”

The energy centre houses two 2.65MW water source heat pumps which extract water from the River Clyde at a rate of 125 litres per second and use the latent heat to produce heating and hot water for the development via a 5km district heating network.

Councillor Iain McLaren, convener of infrastructure, regeneration and economic development, said: “This ambitious project has been many years in the making and it’s a pleasure to see the system up and running, providing low-carbon heat energy to so many buildings already, and with the capability of expansion throughout Clydebank.”

The network was designed to accommodate further growth, with the potential to expand beyond Queens Quay over several phases. The network has been future-proofed, and pipework has been installed to supply the forthcoming Health Centre, West College Scotland, the first 140 flats and retail units currently on site, all other homes planned for the site as well as Clydebank Library and Clydebank Town Hall.

Councillor Daniel Lennie, West Dunbartonshire Energy LLP board member, said: “As well as taking these steps to tackle the climate emergency, we are also addressing fuel poverty for our communities and I’m sure Clydebank will see the benefits of the system for years to come.”