Without going into a chemistry lesson, it’s a material composition that can be quickly and easily coated on top of standard silicon cells to increase the electricity they generate.

It’s widely known that standard silicon only solar cells today have a productivity ceiling of around 25-26% which they cannot go beyond, but when you add perovskite on top of the silicon you create the potential to far exceed this and produce much more power. Recently, Oxford PV set a new world record (independently verified) for the amount of the sun’s energy that can be converted into electricity by a solar cell at 29.52%.

Frank makes, what is undoubtedly a complex process, sound remarkably straightforward: “In our factory, we make the bottom [silicon] cell. We add the perovskite to it and that cell then is our product. That cell has exactly the same footprint as any standard silicon cell. Electrically it behaves the same. The only difference is the voltage is much higher and, therefore, the power is much higher. That cell goes into standard size panels.”

An opinion shared by many in the industry is that silicon pv is already cheap and effective so why try and boost the efficiency and increase the cost unnecessarily? According to Frank it’s a viewpoint that stands up in some situations but not for the UK market: “That view is a very conventional view. It’s driven by a utility scale consideration, where you say ‘If I can put my cells or my modules into a desert and my cost to set up the system is low, then I’m better off using the cheapest cells possible. But that is only true in certain geographies. That’s not true where you have a cost of land and it’s not true where you have limited space, like on a rooftop.”

Are they available in the UK market?

Almost. Frank has a goal of early 2022, with an initial focus on residential rooftop installations and, despite the extra cost for these panels, Frank is certain it’s a no-brainer: “Initially we will look at residential style rooftop installations. The reason is very obvious. The benefit that we are offering to the market – having higher power output from your panels – that is something that is highly valued in residential installations, because you have limited roof space; the cost of the installation is relatively high anyhow, so by increasing the cost of the panel but getting a significant boost in power does make sense for any private investor.”

It’s a logic that stands up to reason. As we become increasingly reliant on electricity, be it to power a newly installed heat pump or charge an electric vehicle, we want to be generating as much of our electricity as cheaply and cleanly as possible.

Are there challenges to overcome?

From an installers point of view, it’s good news, as Frank explains:
“It’s completely ‘plug and play’. While the technology is revolutionary the implementation of it is not. […] So it means the installer fits a panel that looks exactly like any other panel but just with higher power output.”

The big hurdle to overcome, as with existing solar technology, is the initial outlay the consumer must bear for the installation. Whilst the electricity generated is cheap and proven to pay back the installation cost and more over the lifetime of the product, Frank recognises the need for the government to back new technologies and help the consumer with the upfront costs. Unusually though, when I ask him about legislation he’d like to see enacted, he doesn’t bemoan the lack of support for solar. He’s optimistic and hopeful that the government will support high efficiency solar technologies in the future, and he has the composure and quiet confidence of a man who can see all the pieces of the puzzle falling into place.

Do you work with solar? Are you excited by the prospects of perovskite? Get in touch. 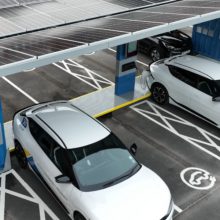