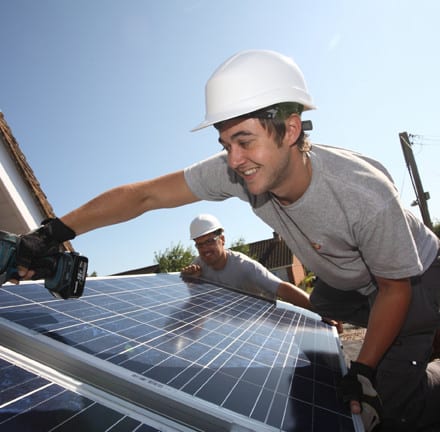 The latest figures from the Office of National Statistics has shown a year-on-year drop in the number of workers employed in the low carbon and renewable energy (LCRE) economy.

The new report has also revealed a drop in annual turnover of nearly £3 billion, following a series of Government subsidy reforms.

In 2014, around 96,500 businesses in the UK operated in the low carbon and renewable energy economy, equivalent to 4.4% of all non-financial businesses. This activity generated £46.2 billion turnover and employed 238,500 full-time equivalent (FTE) workers.

However, this week’s report revealed in 2015, businesses active in the LCRE economy generated £43.1 billion in turnover. The LCRE economy accounted for 1.3% of total UK non-financial turnover in 2015, unchanged from 2014.

Highlights of the latest report from the Office of National Statistics, include:

• In 2015, an estimated 234,000 full-time equivalent (FTE) employees were working directly in low carbon and renewable energy (LCRE) activities in the UK, accounting for 1.0% of total UK non-financial employees.

• The energy efficient products sector accounted for a third of LCRE turnover (£13.9 billion) and almost half of LCRE employment (102,500 FTE).

• Over half (52.9%) of the UK’s turnover from onshore wind activities was generated in Scotland (£1.5 billion).

• The solar, offshore and onshore wind sectors combined accounted for 63.5% of all LCRE acquisitions in 2015.

Scotland’s Minister for Business, Innovation and Energy, Paul Wheelhouse MSP, said: “These are impressive figures that show how the Scottish Government’s focus on decarbonising ‎our energy system has not only allowed us to meet our climate change obligations, and to have done so early, but it has also significantly boosted the Scottish economy.

“They show how large the sector was in 2015 and, with 58,500 employees and a turnover of £10.5 billion‎, the huge opportunity that green energy presents in generating the kind of sustainable growth from which all Scotland benefits.

“It is also telling that these statistics show a sector in rude health, and playing a growing role in our economy, just as the UK Government removed a number of key support mechanisms that have encouraged substantial growth. Today, the sector remains beset by the uncertainty brought about by short-sighted and harmful decisions by UK Ministers and indecision around support in areas such as marine energy, islands wind projects, pumped hydro storage and islands grid connections, which risks investors moving outside the UK.

“While I celebrate the success these figures indicate for Scotland, I am under no illusions whatsoever as to what the wider effect of damaging UK Government decisions, and indecision, may be having on the sector in Scotland and the UK over the longer term and these figures demonstrate the scale of progress that continued, sub-optimal UK policies will put at risk.”

“Technologies like wind, hydro, renewable heat and solar are delivering significant levels of employment and investment across the country and it’s crucial that renewed ambitions for the sector, set out in Scotland’s draft Energy Strategy, are complemented by the right support from government, both at Westminster and in Edinburgh.”