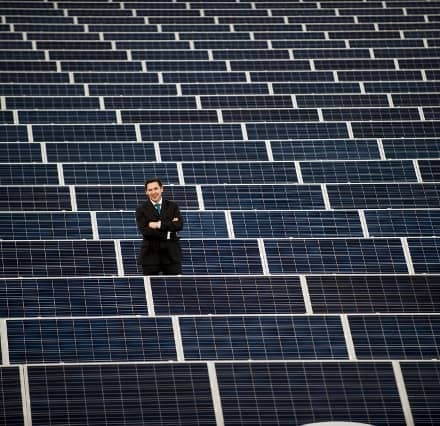 Northumbria University has taken significant steps to increase its use of solar energy to help reduce its carbon emissions.

The University has just completed an investment in one of the largest installations of solar panels in Newcastle on the roof of its Sport Central facility, and has also refurbished existing panels on Northumberland Building, which was the first in the UK to be fitted with a solar façade in 1995.

The huge installation of 110 kW panels on Sport Central’s roof – known as a solar PV array – will save the University over 40 tonnes of carbon dioxide emissions (CO2) per year and £9,000 costs in electricity charges. This is the equivalent to the emissions made by ten houses.

The panels will generate so much power that they will also provide the University with an income of around £8,500 per year by selling surplus electricity back to the National Grid through the Government’s Feed-In Tariff scheme,.

After being in use for two decades, the 40 kW panels on Northumberland Building have also been fully cleaned and repaired to ensure they will continue to provide the University with electricity for another 20 years. The panels currently save the University around 11 tonnes of CO2 per year.

The panels form part of the University’s ambitious carbon management plan, which aims to reduce carbon emissions by 32.5% from their level in 2005 by the year 2020. The University is currently assessing the viability of installing a 150 kW solar PV array at its Coach Lane Campus which, if viable, will save a further 60 tonnes of CO2 annually.

Damon Kent, Director of Campus Services at Northumbria University, explained: “As one of the largest organisations in the region, we are committed to environmental sustainability to ensure that we are leading by example and encouraging new ways of thinking in our student and staff populations. As such, we have introduced a range of initiatives covering the design and use of our buildings, as well as the procurement of our goods and services, to ensure we are working as effectively and responsibly as possible.

“The installation of the new solar array at Sport Central, combined with the refurbishment of panels on Northumberland Building, will support this work, meaning that Northumbria can guarantee it is saving over 50 tonnes of CO2 emissions each year.”

Northumbria University is one of Europe’s leading institutes in terms of research into solar cells. The University is currently working on a £2 million project to introduce cheaper raw materials into the production of solar panels, making them less expensive and capable of being mass produced.

Next month, Northumbria University will be running its Go Green Week (8-14 February). This will include a range of activities to help staff and students identify how they can support the environment – from changing the way they travel to considering what they eat. As a Fairtrade University, Northumbria University will also be supporting Fairtrade Fortnight, which runs from 29 February – 13 March. The event encourages people to buy Fairtrade products to improve the lives and provide a stable income for the farming and working communities that meet Fairtrade’s social, economic and environmental standards, housing associations and businesses.