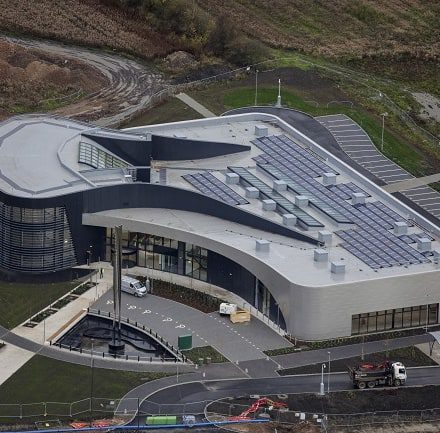 The Innovation Hub at the heart of Derby’s multi-million pound Infinity Park Derby is now being powered by clean, onsite renewables thanks to a new 350m² rooftop solar system installed by EvoEnergy.

212 panels will generate more than 37,000 kWh of electricity every year for the Innovation Hub, which provides managed workspace for advanced manufacturing companies and startups working in the high-tech aerospace, automotive or transport industries.

The 53 kWp solar system is one of a series of environmental features included in the design of the building, which aims to achieve an “Excellent” BREEAM score rating for sustainable construction. In addition to a solar PV system, the building has air source heat pumps, natural ventilation and a floodwater drainage system to save almost 20 tonnes of CO2 emissions annually.

James Clifford, project manager for EvoEnergy, said: “We’re pleased to be supporting such an exciting project that will boost the East Midlands economy; in terms of developing local talent, Derby City Council is definitely going the right way about it.

“Tenants at the Innovation Hub will attract a workforce from the local area, creating local jobs and helping fledgling high tech companies to grow. The fact that its design has had sustainability at its heart from the very beginning serves as an inspiration to other firms with green ambitions.”

The Innovation Hub’s combination of meeting rooms, workshops and offices will serve as a collaborative space for entrepreneurs, startups and SMEs to develop new technologies and expand Derby’s high tech industries.

EvoEnergy was commissioned to install the PV system by the contractors Moorcroft Electrical and G F Tomlinson. The work was carried out during the summer of 2015 by a four-man team of engineers and installers who scheduled their activity around the ongoing construction of the site.

The Innovation Hub is the first development to be completed at the Infinity Park Derby: a joint venture between Rolls-Royce, the Harpur Crewe Estate, Derby City Council and developers Cedar House and Wilson Bowden Developments, that was recently awarded Enterprise Zone status.

More than 8,000 jobs are set to be accommodated within the 250-acre Infinity Park Derby, which will be expanded over the next 10-15 years, with more than 1.8million ft² of commercial property construction planned for the future.