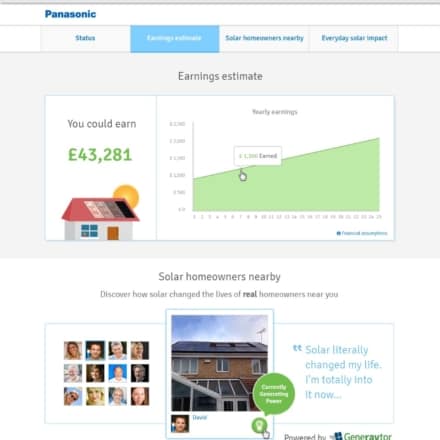 Panasonic has launched its virtual solar service for consumers in three Panasonic stores across the UK.

The online platform is designed to empower homeowners to make an informed decision about installing solar.

By allowing potential customers to build a virtual PV system on their roof, the platform provides an estimate of energy yield and earnings generated by Panasonic’s HIT module. It also calculates investment costs and enables them to request a quote from a Panasonic Premium Installer.

The service will initially be launched at the company’s Crawley, Brighton and Leicester stores.

Daniel Roca, UK country manager, said: “Since launching the virtual solar platform in October last year, the platform has been immensely well received by both UK homeowners and solar installers.

“By launching the service within these selected stores, we are giving UK consumers even greater opportunity to see how financially viable it is to go solar, as well as learning more about our expanding solar module products for the UK market.”