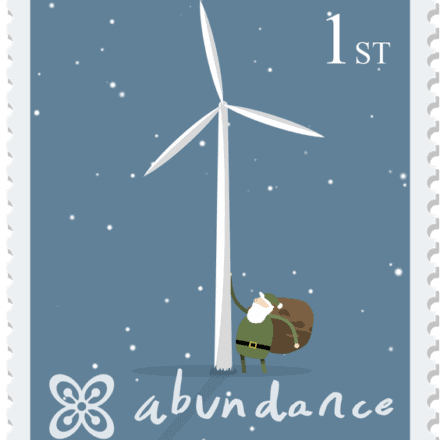 A new campaign has been launched to resurrect the original green Father Christmas by UK crowdfunding programme Abundance Generation.

Abundance allows individuals to invest as little as £5 in renewable energy projects, or to gift an investment with a fixed return to another, via its Abundance Generation online store.

According to the company, the green image of Father Christmas was last seen in the 1920s before a well known drinks company expanded his wasteline and put him in red brand colours.

Bruce Davis, cofounder and joint md of Abundance Generation, said: “Yes, we’re stealing Father Christmas from the drinks industry. We’re reuniting him with his green coat because, once again, Christmas is about far more than acquiring ‘things’.  There’s a fast growing shift away from giving material goods, to buying gifts with meaning.  We’re pretty sure Father Christmas would approve of our Green Energy Investments.  A gift that’s helping to create a clean energy future, as well as a secure return for people.”

Abundance Generation is also promoting its ‘Green Energy Investment’ as a meaningful Christmas present to give this year. Individuals can gift an investment of £5, £10, £50, £100 or £1,000 in solar or wind power projects across the UK, to be part of the shift to clean energy. This offers a fixed return of 6.65 percent IRR over a 19 year duration. Investments can also be put into a bare trust until a child reaches 18 years of age. Gifting a Green Energy Investment can be set up via the Abundance Generation online Christmas store: https://www.abundancegeneration.com/greensanta

Part or all of the original invested capital may be at risk and any return on investment depends on the success of the project invested in. Estimated rates of return are variable and estimates are no guarantee of actual return.