The European Commission has decided to impose import duties of 47 per cent on Chinese PV products, according to several media outlets.

The EU has been investigating allegations of Chinese manufacturers dumping panels in Europe at below cost price following complaints from European manufacturers of unfair trading. An announcement had been expected by 05 June as the commission deliberated whether to follow the USA in levying the tariffs.

The European Commission is yet to officially comment but Reuters understands from two officials that tariffs will be imposed between 37.2 per cent and 67.9 per cent on Chinese solar panels exported to the EU – a market worth $77bn last year.

The commission will now need to consult EU member states before formally publishing tariffs in the Official Journal of the European Union next month.

The UK PV industry has reacted with disappointment to the likely price rise in panels which will follow and be passed down the value chain to the consumer.

Large scale developers Lightsource Renewable Energy‘s ceo, Nick Boyles, said:  “Our scale will help to lessen the impact of the tariffs, but these increased costs will threaten some projects and the advance of solar in the UK and the jobs that have been created. As an industry we have all benefited from lower cost panels, to such an extent that the industry had bounced back from changes to the Feed in Tariff last year and was becoming a really competitively priced form of energy. The only winners here are a few European manufacturers, for everyone else this casts a shadow over the success of solar in Europe.”

STA ceo, Paul Barwell, said: “These duties, if imposed, will damage the UK solar market, particularly the large scale ground-mount sector. The cost increases resulting from these duties will throw the UK off course from its solar roadmap. We will continue lobbying DECC and BIS to ensure the UK votes ‘no’ to these proposed duties.”

Stephen Hill, partner and clean energy expert at global law firm Eversheds LLP, said: “The recent and continued slashing of subsidy has meant that the cheaper Chinese panels are often the only economic solution to make solar installations viable. The consequence of a tariff on panels will either be an increase in subsidy (paid for by the consumer) or the slow demise of the solar industry.”

Orta Solar managing director, Nick Pascoe, said: “We’re tremendously disappointed to hear this proposed news. We invest many millions in surveying, planning, legal, financial and technical design work typically twelve months prior to constructing these projects and as of today we no longer know whether it will be economically viable to construct UK commercial scale Solar farms later in 2013 and beyond. How can we possibly continue to invest?”

Sean Collier, general manager of Access Renewables, said: “The imposed import tariff will raise module prices and we believe that demand will decline across Europe as installing a Solar PV system will costs more for the end user. We understand from the report that the EU believes an extremely high import tariff will place EU manufacturers on a level playing field with Chinese companies. In my opinion I do not believe this is the correct way to deal with the issue.” 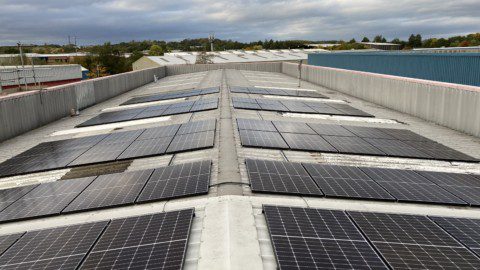 AceOn, a West Midlands renewable energy and battery company, is demonstrating its own commitment to helping the environment with a…
< 1 min read
Dec 3rd 2021

Specialising in helping homeowners reduce their carbon footprint, we hear from The Little Green Energy Company on the growth of…
3 min read
Mar 22nd 2021
We use cookies to ensure that we give you the best experience on our website Close