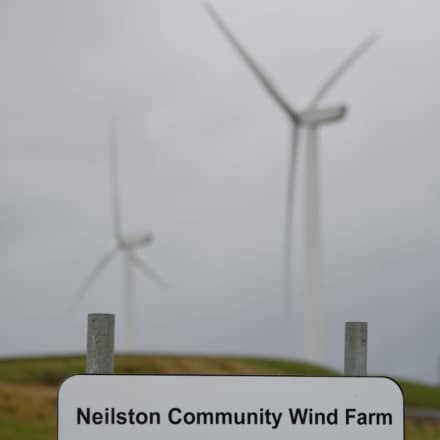 The people of Neilston bought a 28 per cent share in the wind farm with their partners Carbon Free Developments. They raised £950,000 in cash to buy their stake, which was loaned in part to them by the Scottish government and other organisations.

The arrangement is the first of its kind in Scotland and will give the village of Neilston around £10 million of income over the life-time of the wind farm, supporting the village’s sustainable development and empowering residents to make improvements locally.

Deputy first minister Nicola Sturgeon said: “The Neilston Community Windfarm is a great example of community-led regeneration, which is why the Scottish Government is supporting this £15.6 million development with a £250,000 investment as a pilot for the Renewable Energy Investment Fund.

“Industry figures show that Scotland’s renewable energy sector has attracted £2.8 billion of investment in Scotland since 2009. This government is focused on supporting the growth of local and community ownership of renewable energy so that communities can share the rewards of Scotland’s vast natural resources.”

Pauline Gallacher, projects coordinator for Neilston Development Trust, said: “We want to make Neilston a better, more sustainable place to live and realised that we, as a community, needed to secure income to make this happen.

“We partnered with Carbon Free Developments to build our own wind farm and now we have secured funding for 20 years that will deliver projects across the community. We didn’t rely on grants to fund this – all the capital we raised was in the form of loans and will be repaid.

“I think we’ve shown that communities in Scotland can control their own destiny by becoming involved in the development and ownership of renewables. It has been a long process but it has been worth it – we’ve secured a brighter future for Neilston.”

“Scotland has ambitious targets to meet in renewable energy – imagine the difference that could be made in generating wealth and community development if more towns and villages worked with developers to co-invest in wind farms.”