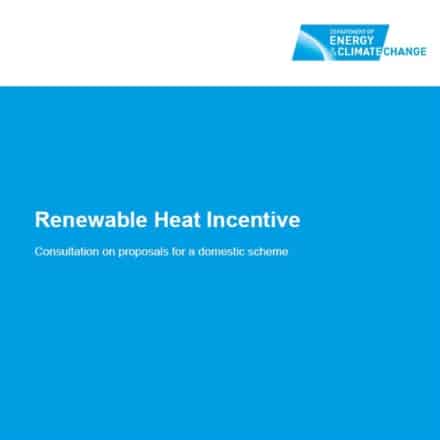 The industry has expressed its disappointment at the Department of Energy & Climate Change (DECC)’s decision to further delay the introduction of the domestic Renewable Heat Incentive (RHI).

Whilst a launch was expected this summer, the government confirmed that the scheme will not be available to householders for at least another 12 months.

Instead, the Renewable Heat Premium Payment (RHPP) grant programme will be extended until next March whilst RHI tariff levels should be known in the summer.

The announcement has come as a blow to many in the industry who have followed developments since the RHI was first seriously talked about in 2010.

Both Andy Boroughs, Organic Energy, and Rob Gardiner, Econic, said that the main worry now was that repeated delays threatened to undermine the credibility of DECC’s new delivery timetable.

“I think that a health warning to both householders and the industry should be attached to this news, in the sense that we still only have a timetable, not the detail of any resulting scheme,” said Andy Boroughs, managing director of Organic Energy.

“Experience has taught many of us that the goal posts have a tendency to be moved on a regular basis and we should be promoting our technology and services based on their genuine strengths and benefits, with government incentives seen as a bonus if, and when,  they materialise.”

Rob Gardiner, managing director of Econic, said: “The government’s Renewable Heat Incentive (RHI) has the ability to make the renewable heating sector take off – but significant skills and capacity to deliver schemes will be lost due to ongoing delays and lack of clarity.

“Businesses within the industry need rapid action to stimulate growth within the renewable heating sector– some will not be able to sustain the cost base of skills necessary for the industry over a further period of delay.”

REI editor, Lu Rahman, added : “This delay to the RHI disappointing to say the least. Installers and manufacturers have spent considerable time and money preparing for the business opportunities this incentive scheme would bring. Now they have to wait again. The RHI promises benefits for the homeowner, the installer and the manufacturer or supplier. For many, those benefits now seem a long way off. Greg Barker spoke of the positives in this RHI announcement but I, along with many in this sector, am struggling to see what they are.”

Many installers also took the Twitter sphere with the following messages left within hours of DECC’s announcement.

Vietec Heating: “I will no longer mention RHI to any of my customers. To those I have already mentioned it to, I will have to explain that we have a lying government.”

Dimplex: “Is it now time to dump the concept of the domestic RHI? There is no future in an industry reliant on a non-existing incentive.”

Tim Pollard, Plumb Center: “We do not believe that DECC understand the serious nature of delaying the RHI. SMEs investing in training and people will be hard hit .”

REHAU Renewables: “So a delay to April 2014 for the domestic RHI. Struggling to find any positive news despite the government’s ‘recommitment to renewable heat.”

Other comments from industry leaders included:

Tim Bennett, Hybrid Heating: “This is a complete missed opportunity by the government to provide the struggling homeowner with Renewable Heating options.

“At a time when there is high unemployment and record heating bills, this delay will cause real problems for a renewable industry that has stalled due to the changes in PV and who have worked at building a customer pipeline in readiness for the RHI scheme.

“The time and cost of investment by manufacturers and installers who have worked to the promised RHI timeline feel severely let down, unfortunately some will not be around if and when RHI is eventually launched.”

STA ceo, Paul Barwell: “While this latest delay to the domestic RHI is undoubtedly an enormous disappointment to the solar thermal industry, we remain committed to working constructively with DECC to ensure that there is no further slippage. We must ensure that a successful domestic RHI is finally launched next spring.”

Phil Hurley, managing director of NIBE: “Renewable heat will play a central role if the UK is going to achieve its carbon reduction targets – so further delays to the domestic RHI are certainly disappointing. As a leading manufacturer we are committed to developing renewable heating solutions that can effectively meet growing demand in line with official targets. However, it takes more than just a well-engineered product to drive uptake. Confidence in secure, long-term tariff support is still needed for these technologies to compete with conventional heating systems on the necessary widespread scale.”

Dave Sowden, chief executive to the Micropower Council: “The early feedback is that the market is bitterly disappointed with this delay. Taken with the delay in confirming the next steps of the “zero carbon homes” policy, today’s announcement is forcing industry to question whether the coalition is serious about promoting domestic Renewable Heat during this parliament.

“Despite there being some snippets of good news buried in the detail, this is a further setback for investor confidence. It is becoming increasingly difficult to give positive messages about whether the Coalition as a whole remains committed to domestic renewable heat, despite the  seemingly good intentions of those within DECC.

“Following on from an absence of any mention in last week’s Budget, a Cabinet-level unequivocal cross-government commitment to an ambitious renewable heat policy is urgently needed to restore investor confidence.”

Tim Minett, ceo of biomass supplier CPL Distribution: “It makes sense to delay the domestic scheme until the lessons can be applied from the non-domestic scheme. However, again, this absolutely must be the final delay as businesses have invested between £150m and £200m in the emerging British biomass supply chain and, while we remain patient, every delay increases the hurdles for business and steepens the uptake curve necessary to hit the UK’s targets.

“Despite the delays, we remain positive that the RHI will fuel economic growth, investment and jobs, as well as substantial environmental benefits. The minister gave us his express assurances that consultation on tariffs would be under way within weeks and that the new tariff rates would be announced in early autumn. It is absolutely imperative that they stick to this timetable.”

Chris Dale, director of Danfoss: “This latest announcement by the government is disappointing for the industry, but not entirely unexpected, as there have been so many delays to the Renewable Heat Incentive (RHI) for domestic users over the past few years.  The RHI is exactly what consumers and the industry need to significantly boost the uptake of low carbon technologies and this simply will not happen until the Government makes it available to domestic users.

“On a more positive note, at least the government has committed to a launch in 2014, but in an industry where delays have become a hallmark, this will bring little comfort.”

Darren McMahon, marketing manager, Viessmann: “In reality, the news that the domestic RHI would be delayed was always a danger.

“It is hard to see how the UK will be able to meet the emissions reduction goal of 80 percent by 2050 without such a subsidy. This ambitious target and today’s announcement simply do not go hand in hand.

“The government is very focussed on electricity distribution and the electrical network. Yet the biggest gains can be made in the heating network, particularly in the domestic heating sector, which is currently insufficiently supported. It is unrealistic to expect the renewable heat premium payment (RHPP) or the Green Deal to fulfil the same promise as the domestic RHI.

“The lack of political will and ambition is disappointing.”

Tim Pollard, Plumb Center’s head of sustainability: “It’s hard not to be disappointed by the delay of the Renewable Heat Incentive (RHI) until the spring of 2014.

“But there are crumbs of comfort for installers. I welcome the news that government has earmarked £250,000 for a first come, first served voucher scheme to boost renewable training. It also appears the scheme will focus on SMEs, which is great for our customers.

“The extension of the Renewable Heat Premium Payment (RHPP) will boost the market in renewable technologies such as biomass, solar thermal and heat pumps, which will help our off-grid customers.

“We also welcome the £250,000 investment in training the apprentices of the future working in the renewables industry.

“It’s important to stress, with or without an incentive, renewables offer a vital alternative to beleaguered homeowners facing spiralling energy bills.”

Simon Lomax, managing director, Kensa: “Given DECC secured a £864m budget, it is difficult to accept the repeated delays which mean the domestic scheme will only run for a maximum of a year before the next election and more uncertainty. Most of the money will be left unspent which may please the Treasury but will have a devastating impact on renewable heating businesses, many of whom have believed previous DECC pronouncements and invested heavily in readiness for the RHI.  The coalition originally said it would launch in Spring 2011.”

Bruce Allen, HETAS: “Of course we are disappointed that the domestic RHI will take more time to be implemented but on the other hand this delay gives more time to get more heating installers trained to install great biomass heating systems. The voucher scheme for training installers announced in the Future of Heat document is great news.

“HETAS currently has the only Installer Biomass Training mapped against the National Occupational Standard so we will be ready to support large numbers of heating installers to move over to biomass in time to take advantage of the extra work to come from RHI next year. It’s a fantastic opportunity for installers and we have approved training centres all over UK.”

Chris Higgs, Managing Director of Freedom Heat Pumps, looks back at industry developments and outlines his case for why he…
4 min read
Mar 22nd 2021
We use cookies to ensure that we give you the best experience on our website Close