A new MCS method was recently launched by climate change minister Greg Barker, but is it sufficiently accurate and suitable for all solar technologies? asks Chris Laughton, managing director of The Solar Design Company

Shading estimation is an important technical aspect of solar design. Shading measurements should be undertaken by all MCS solar installers to increase the accuracy of financial predictions.

Historically, both solar thermal and PV installers have been required to provide a SAP performance estimate. This used a very simple shading assessment method for both solar technologies. The problem with the old SAP method was that it was rather open to interpretation and did not include enough real-world detail to allow for accurate system optimisation.

In general, all predictive shading analysis methods start by assessing the loss of sky area caused by objects in front of the solar array. If we imagine there is a hemispherical dome above us, we can theoretically count the parts of this ‘sky dome’ obstructed by objects (both nearby and far away on the horizon). A simple way to do this is to divide the dome into a series of imaginary ‘squares’ and then count the squares that are obstructed. This effectively was the basis of the old SAP method. However, in reality many installers were confused as to whether the squares were counted in relation to the compass direction and pitch of the solar array, or whether this was measured as if the collector was oriented horizontally.

The second problem was that an imbalance of solar energy comes from different parts of the sky at different times. This means the ‘count-the-squares’ method has to be modified to account for the higher solar radiation found in the summer and the middle of the day. Further issues were caused by the fact that near-shading objects cause stronger shadows than far-away objects. Their effect is also related to the width of the object in relation to its distance from the array.

The MCS shading method shown in the new PV Guide attempts to address these issues by introducing the concept of a sunpath diagram with diminishing sizes of squares to represent the different values of irradiation falling from sky areas. MCS installers will now have to give a greater consideration to shading by way of recorded evidence handed over to the customer. One question that has arisen is why there should be any difference between a shading assessment for PV and solar thermal since both technologies are entirely reliant on the same energy source. Whilst the conversion efficiencies of both technologies are different once the solar radiation has arrived on a surface, it remains the same value immediately before striking the surface: whether that surface is a silicon crystal, a copper absorber or even a simple glass window. Many installers who frequently fit both PV and solar thermal will be hoping that they don’t have to learn two different methods.

Some of the more progressive MCS installers have already taken the initiative to improve their site analysis by using electronic measuring tools which quickly capture the whole ‘sky dome’ taken as an image. It is critical for accuracy that this measurement is taken from at least the four corners of the proposed array to average the effect from all shading objects. For many buildings, this can all be done safely from ground level using an extendable pole or even a nearby skylight in the roof. There can be a serious increase in the margin error if only one shade measurement is taken from ground level when the proposed array is in fact to be mounted on a roof or wall.

Trees also present an issue since deciduous types drop their leaves in winter and so cause two different extremes of shading. It is also often overlooked that solar radiation is partly reflected by neighbouring objects. Both of these factors can be accounted for back in the office using simulation software.

Recent advances of PV technology and simulation software make it possible to design PV systems that are less sensitive to shading. This requires careful matching of modules to inverters as well as the orientation and number of bypass diodes in the modules. The new MCS shading method is certainly a sign of progress over the old method but perceptive customers will be expecting the best site analysis to suit their individual circumstances. 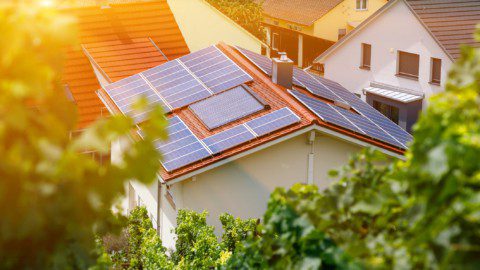