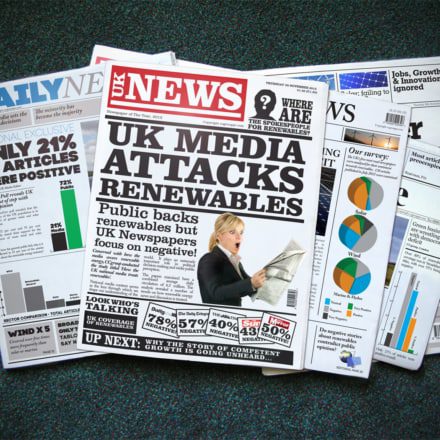 The renewables industry is facing a communications crisis, according to a recent study from the CleanTech team at PR Consultancy CCgroup.

In a report which focused on media coverage of the sector, the authors found that sentiment shown by the national media towards green energy is mostly negative and out of step with wider public opinion.

As the media plays such a vital role in how we perceive and understand our world, the future growth of the renewables sector and its attractiveness to investors could be threatened if efforts are not made to better communicate the benefits of renewable technology with the public in order to mitigate media negativity.

Charlotte Webster, head of CleanTech at CCgroup, said: “Right when the renewables industry should be seeing rapid growth, it’s in the centre of a communications crisis with the media holding one arm behind its back. This economy boosting, innovative, business savvy industry is simply not having its story heard.

“But its not the media’s fault. There is an empty platform here that renewable energy businesses need to fill with urgency, and those that do will be the ones to see the rewards not just for industry as a whole but themselves too.”

Throughout July 2012, 138 articles were studied from across The Sun, Daily Mail, Daily Mirror, The Daily Telegraph and The Times.

Negative sentiment was strongest across the three broadsheet titles with 55 percent of the articles of a negative nature. The Daily Mail was worst where it was 78.5 percent negative and only four percent positive.

The full ‘How the UK national media treats renewables’ study is available for download by clicking here.