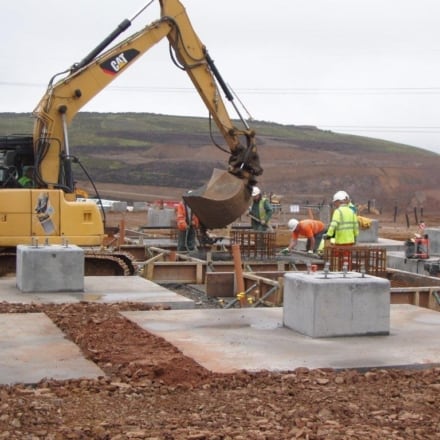 The 48-turbine Fallago Rig wind farm is nearing completion and is targeted to be delivered safely, on time and on budget, despite many challenges. It is expected to enter commercial operation in 2013 when it will generate 144 MW of sustainable electricity.

Owners EDF Energy Renewables are delighted with the progress of the site, located in the Scottish Borders, which has been a huge boost for the local economy.  An estimated £6-7 million has been spent through local suppliers, 230 people – including 15 locals – have been employed on site and an estimated £110 million has been injected into the UK economy.

“It has been a massive operation and our teams have overcome risks and difficulties in what has been a very hostile environment. Fallago Rig is our biggest development to date and has been a multi-contractor project; a decision which has paid dividends for us,” said Don Mackay, head of onshore construction for EDF Energy Renewables.

“There are some staggering statistics – we have laid 39 km of access roads, poured 19,000 cu metres of concrete and put down 2,600 tonnes of steel reinforcement. At the peak of activity on site, there were up to 230 men working here at any one time, and all this has taken place safely.”

All of the components for the Vestas V90 turbines were delivered to Rosyth and then by road to site.

“It takes 4.5 hours to transport a turbine from Rosyth to Fallago Rig and we have completed 384 load moves without one incident. The project has a remarkable safety record and this is something we are very proud of,” added Don.

RJ McLeod was selected as the principal contractor and has co-ordinated a further five contractors on behalf of EDF Energy Renewables.

“As well as the immense economic benefits for the area, the community will also benefit from a further £240,000 in community fund for every year the wind farm is operational,” added Don.

“All the challenges have been worthwhile. There is a sense of pride, as we near completion, that the team has delivered a renewable energy project on this scale safely, on time and on budget, with minimal impact on the local environment. When operation ceases here, the site will be returned to its original state, having played its part in delivering low-carbon electricity for more than 80,000 homes in Scotland.”