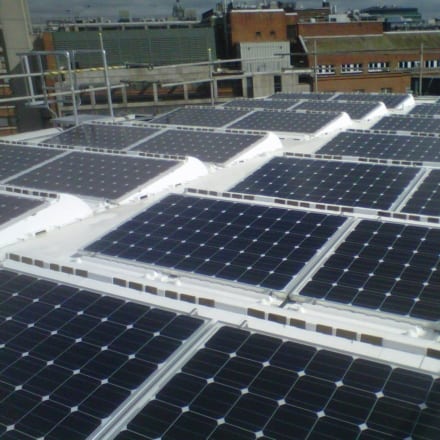 The London School of Economics (LSE) has thrown its weight behind the continued financial case for solar whilst also boosting its green credentials by investing £135,000 in a renewable energy project.

The school has unveiled a large-scale solar PV programme made up of six projects, all installed before the FiT rate cut on August 1 – and saving it £25,000 a year in energy bills.

The latest of the installations, at the LSE’s main library and its St Clement’s building, are forecast to produce around 75,000kWh of power and save 40 tonnes of CO2 a year. They consist of more than 200 individual solar panels.

Myriad CEG was re-comissioned to complete the latest projects having completed projects to generate electricity at the LSE’s sports ground, the New Academic Building and its High Holborn and Carr Saunders halls of residence.

The LSE has been awarded a First, for the fourth year running, for its environmental and ethical performance in the People & Planet Green League 2012.

Julian Robinson, director or estates at LSE, said: “Having these panels installed is a win-win for LSE. Making use of solar power is contributing to the reduction in the School’s carbon footprint while saving money in the long run.

“Naturally we expected to have a robust business case and by reacting quickly to the new FIT’s regime, with Myriad’s help, we were able to effect a significant PV installation across our estate.

“We are generating an annual saving across all six installations of £8,500. On top of this we are receiving the FITs which come to around £16,000, making a total of £24,500 pa against our capital investment.”

Lee Baxter, PV sales manager, Myriad Solar, added: “In order to achieve the maximum yield of energy possible, we spent a considerable amount of time designing the system to avoid areas of shading on the roof and to best utilise the available roof space.

“We used all the available space and this is a great example of what can be achieved with careful design and planning.

“The figures also show the economic benefits that still exist in utilising solar power. We were able to ensure that the university got the best possible FiT available.

“Even with the reduction in the rate, the tariff remains a great incentive to individuals or organisations looking to see what the use of renewable energy can deliver for them.

“We are building a strong track record in working with educational establishments such as LSE, who are very aware of their environmental responsibilities.”