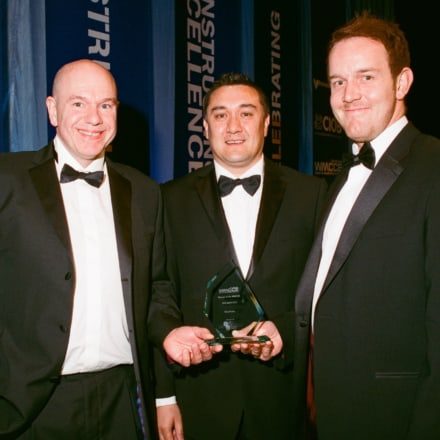 Kidderminster-based Eco2Solar is celebrating after scooping an accolade at this year’s West Midlands Constructing Excellence Awards 2012.

The company was presented with the industry’s SME award at the International Convention Centre in Birmingham which will also see the firm automatically qualify for entry into the National Constructing Excellence Awards 2012 in London (30th November 2012).

In particular, Eco2Solar says the judges were impressed with the company’s commitment to quality, customer service and the most up to date technologies.

“We’re delighted to be recognised by WMCCE for our services and growth in the West Midlands,” said Eco2Solar’s managing director Paul Hutchens.  “The award is a fantastic testament and acknowledgement of the hard work of our entire team over the last five years.

“Despite the challenging economic climate, we have remained at the forefront of our industry not only in the West Midlands but also further afield with high profile projects inLondon, the North-East andNorth Walesbeing completed in the last few months.

“We are committed to delivering a quality service and providing free, renewable energy for our customers to help significantly reduce carbon footprints, which is vital to protecting the future of our environment.”

Tony Wehby, chairman of the West Midlands Constructing Excellence Awards, said: “The judges were unanimous in their decision to award Eco2Solar with the SME award. They were impressed with their ability to demonstrate growth in the recession and their ability to invest in new markets and technologies.

“Eco2Solar are a very worthy winner and we wish them every success at the Constructing Excellence National Awards.”