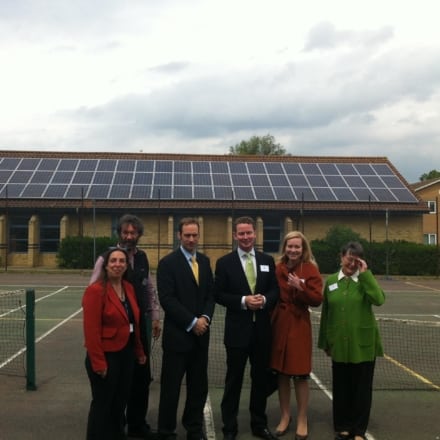 “The way to get a wider up take of solar is through community schemes,” Barker said yesterday at the Cherwell School in Oxford. “We want community energy groups to flourish.”

As much as a quarter of The Cherwell School’s total energy needs are now provided by a 230-panel solar installation – over two roofs – that was installed by solar experts Joju Solar. The installation produces a 46kw peak.

It also has a weather station on the roof and will soon have a software link from the website to all desktops at the school showing real-time generation data.

“It’s not just a one off investment that saves a bit of money on electricity, it’s an ongoing piece of work that the students will benefit from in years to come,” said Julie Stewart-Thompson, assistant head teacher, The Cherwell School

“We are going to have the most fantastic set of real, live, data the students can use, in geography and science in particular… they hear about solar farms on the news and now they can be physically part of it.”

Barker said he hope that many more schools around the UK would set up similar community-funded solar installation projects. “In the future, schools will be obliged to take a look at their energy efficiency and we are working on the models to help them do that,” he said.

Local energy champion, Steve Cappleman, added: “The interaction between the school, the community group, and Joju shows how beneficial this kind of project would be to a number of schools.”

Shane Crump, E&I engineering manager, and Peter Benyon, market leader, at GHD – one of the world’s leading professional services…
3 min read
Nov 10th 2021
We use cookies to ensure that we give you the best experience on our website Close