The international Plus X Award recognises innovative technological, sports and lifestyle products and the televised Plus X Award ceremony this year took place in Cologne on 10th May.

“It was an honour to be named and recognised alongside many esteemed companies in this prestigious international annual award for our efforts and contribution. We will continue our programme of innovation in the field of alternative energies,” said Christian Bouda, the Slough-based firm’s new MD.

Azur Solar says the AZUR INDEPENDA is an intelligent independent electricity system with high-performance battery capacities making home owners nearly independent from conventional energy sources and rising electricity rates. In addition to feeding the public grid with self-produced energy when usage is low, the batteries are designed to store the produced power for later use at night or when the sun is not shining, so minimising the need to buy energy from power suppliers. AZUR INDEPENDA is already sold in Germany and will be available for the UK late 2012/early 2013. 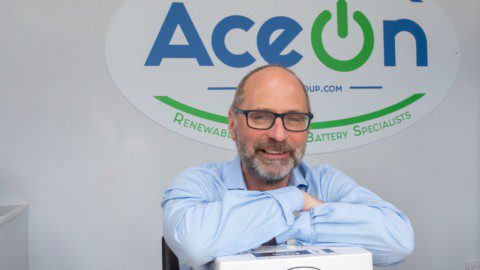 Leading battery and energy storage specialist, AceOn, is set to reveal a major new product at the Solar and Storage Live event next…
2 min read
Nov 12th 2021
We use cookies to ensure that we give you the best experience on our website Close