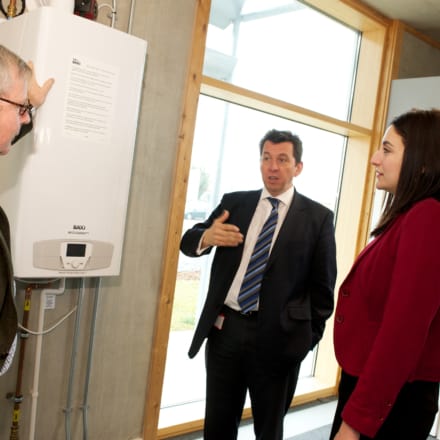 Ms Berger was given a tour of the award-winning building which showcases many of the low carbon technologies which are currently available and included in green policies such as the Green Deal, which aims to promote sustainable use of energy in homes and businesses. Representing Plumb Center, Tim Pollard, head of sustainability and Simon Allan, renewables director outlined the company’s strategy for implementing new government schemes, as well actively reducing their own carbon footprint.

During the visit the shadow minister also met with a group of installers and specifiers who were on a training course. They expressed their concerns over current financial incentives and the challenges of convincing homeowners to invest in renewables in the current economic climate.

The Sustainable Building Centre has become a local landmark and hosted a series of high profile visitors since its inauguration in 2008, including members of the Commons Environmental Audit Committee. Featuring over 170 energy efficient products, the centre also hosts a range of training courses designed which help installers achieve MCS accrediation.