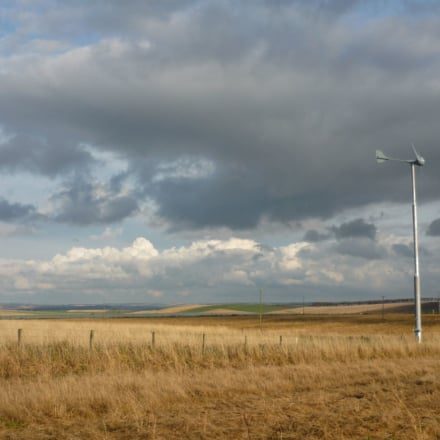 Small wind turbines are playing an increasingly important role in helping the Scottish government to meet its Renewables Routemap commitments – specifically with reference to the government’s ambitious renewable energy target of 30 per cent by 2020. The 2020 Routemap for Renewable Energy report highlights how innovative migrogeneration technology solutions – such as the Evance small wind turbine – can support community and locally-owned energy generation, and also help address fuel poverty issues in the most remote areas.
Evance Wind Turbines – UK manufacturers of the R9000 small wind turbine – has seen an increasing number of homeowners and farmers across Scotland put small wind turbines to work, with many benefiting from installing multiple small wind turbines rather than one large turbine. During 2011 Evance has seen healthy sales growth in Scotland, especially in the more remote regions. For example, 50 Evance turbines were installed in the Orkney Islands alone, and all have performed strongly during recent storms – despite peak wind gusts of over 130mph.
Evance’s small wind turbines are also proving an attractive option for Scottish residents who are increasingly unable to afford domestic heating oil costs that remained high throughout 2011, and have increased by some 66 percent over the last three years and by over a quarter in the last year alone. For these and other remote residents, fuel poverty is a very real threat. It’s estimated that around 900,000 households in Scotland – more than one in three – are currently in fuel poverty. By installing an Evance R9000 small wind turbine in the right location, remote households and businesses can make substantial energy savings and generate an income through Feed-in-Tariffs (FiTs). Some organisations also offer a service where they provide free wind energy in return for the land to install a R9000 small wind turbine.
“We have had great success in Scotland during 2011, and enter 2012 with a strong order book for Scottish customers – we anticipate 10 turbines per week being installed during the first three months of 2012,” commented Kevin Parslow, CEO of Evance Wind Turbines.
“With impressive wind speeds in most regions across Scotland, especially in the Highlands and Islands, it makes sense for that renewable energy source to be put to good use.
“Working with organisations such as Community Energy Scotland, we have been particularly successful in communicating the benefits of small wind turbines, and helping our customers to realise dramatic energy savings and CO2 emission savings,” he continued.
“Our turbines on Orkney are generating around 870MWh of electricity annually – based on an annual average wind speed of 7m/s – so saving over 370 tonnes of CO2 emissions a year – equivalent to taking over 160 cars off the road. Many of our customers have also been able to reduce energy bills by 50 per cent and some even eliminated their electricity bill over last winter.”
One Evance customer, the Linnitt family from Orkney, saw their R9000 turbine produce 18,500kWh of power in its first year – dramatically reducing energy bills and earning a Feed in Tariff income of over £5,000. According to Mrs. Linnitt: “It’s a great feeling to be producing green energy and to know that over the last year we have saved nearly eight tonnes of carbon emissions. We wanted a reliable turbine with good performance, and the Evance small wind turbine has met all our expectations.”