It is understood Carillion, who had spent £300 million acquiring Eaga plc earlier this year, had secured a further £300 million in bank funding to finance £200 million worth of free installations on social housing projects and £100 million to maintain the eligible panels over the 25-year length of the Feed-in Tariff scheme.

But when energy minister, Greg Barker moved the scheduled deadline from April 1 to December 12, Carillion Energy’s £600 million investment no longer provided any meaningful form of return.

According to one company source, a team of accountants crunched the revised numbers day and night and still couldn’t decide if the Carillion Energy business plan would remain feasible beyond the December 23 date for the end of the consultation.

“The cuts were far more savage than we anticipated,” one high-level insider said last night.

The company is understood to blame government ambiguity over a proposed 16.8p rate for mass installations for forcing the planned mass jobs cut.

And now other companies, such as free panel supplier HomeSun, are anxiously looking to their future.

HomeSun signed up Carillion Energy to be its exclusive solar panel installer as it rolled out an ambitious programme of fitting free PV installations on homes. The long-term security of the scheme is now in jeopardy as the new proposed 21p tariff for solar PV means rent-a-roof models no longer provide satisfactory value for money.

Yesterday’s job-cut announcement by Carillion Energy has been seen by many market observers as inevitable.

“It’s like a manager preparing his team for an FA Cup Final,” one analyst said. “He sets out his best players and the tactics to last the entire 90 minutes to win the match.

“But at half-time when the team is one-nil down, the referee comes in and says he’s only going to allow 10 minutes of the second half to be played – what chance have they got of turning it around in such a short space of time?”

The industry commentator said Carillion Energy’s once-robust revenue model is now flawed as it was based on bank lending and the financing costs were only viable if the company could close in on a 30,000 target ahead of the original April 1 deadline.

But Carillion Energy company chiefs found themselves “between a rock and a hard place” as employment legislation means they have to provide 90 days’ consultation to the entire workforce in order to streamline the future operation and survive.

“It is a dreadful situation to be in,” the analyst said. “If they employed 100 workers but thought they will only need 70 workers this time next year – they have to consult all 100 and make each and every one of them concerned about their future.

“What the government doesn’t seem to understand is that the cost of a panel accounts for only half of the expenditure of an installation.

“The initial projections show that even over the entire 25 years, it has become more expensive to install a solar panel once the banking costs are factored in.

“I feel very sorry for Carillion Energy as the government has ambushed them with too high a hurdle in too short a space of time to get any kind of model to work.

“It’s all completely unknown, they don’t know what size of market they should be shaping for. In this situation a few pennies makes all the difference between having a business on this scale and not having a business.

“They, and everyone who depends on them, are flying blind until the government provides certainty… and perhaps some flexibility.” 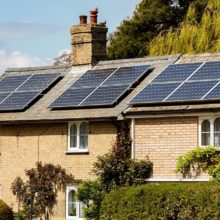