An effective launch of the Renewable Heat Incentive (RHI) has been thwarted because the government fears a repeat of the chaos surrounding solar Feed-in Tariffs, the UK’s largest supplier and installer of renewable energy equipment has revealed.

Myriad CEG said concerns that scheme could become massively oversubscribed in a similar way to FiTs were understandable but the government also needed to ensure the RHI didn’t ‘fall flat’ through lack of awareness.

It said the fact that companies were unable to afford major investment was also hampering take up of the scheme, which has had a slow take up – a week after its launch.

The RHI scheme offers guaranteed payments for the heat generated using low carbon technologies, such as ground source heat pumps, biomass boilers, anaerobic digestion systems and solar water heaters and had been scheduled to launch at the start of October.

But it was delayed as the Department of Energy and Climate Change (DECC) waited on formal state aid approval from Brussels.

The European Commission finally gave approval subject to the large biomass tariff being reduced from 2.7p per kWh to 1p per kWH and the scheme was launched on November 28.

Myriad CEG spokesman Steve Roberts said: “The government is in two minds about publicity for the RHI.

“On the one hand they want the scheme to be a success but on the other they don’t want a repeat of the FITs situation where the scheme became rapidly over subscribed.

“While this caution is understandable we need to get the message out there or the scheme will fall flat.

“Other forms of financial support like tax incentives or capital grants have lead to rapid growth of heat pump sales in European markets like France and Germany.

“In the UK, market grants for renewable heating systems have helped support the market in the past but the RHI is a different form of support requiring the client to find the full capital cost of the system themselves.

“A new heating system for a new commercial building is a fairly major purchase and in the current economic climate capital spending is under great pressure.

“Many potential clients may opt to stick with existing systems or may simply revert to conventional heating for their buildings.”

Steve Roberts, director of Econic Renewable, Energy Solutions part of the Myriad CEG group which specialises in ground and air source heat pumps, added that the combination of lack of awareness and general financial caution could make it hard for the RHI to gain momentum in the short term.

He added: “The fact that the financial support is initially only available to the commercial sector will no doubt slow the uptake. With Feed in Tariffs for solar PV nearly all the early projects came from the domestic sector.

“Part of our job in the renewable industry is to get the message out there to potential customers that now is the time to start considering a renewable heating system.

“The opportunity to reduce carbon emissions and save on energy costs should make this a very attractive proposition once we get the chance to explain it!”

He also pointed out that there is scope to provide finance for projects where capital costs would otherwise be a major barrier.

He said: “Many financial institutions are keen to get involved in funding renewable heating schemes, particularly larger scale or community projects.

“As the word spreads and we can show the savings being made on real projects we’re sure that the market for renewable heating will really start to take off.” 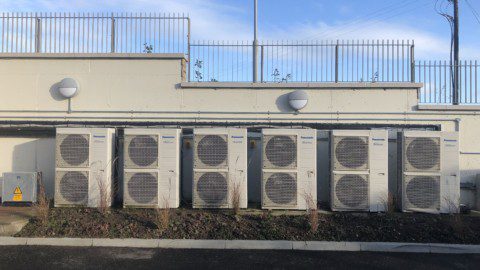 Panasonic air-to-water Aquarea heat pumps are providing energy-efficient heating and hot water to the Wicklow Hospice in Ireland.
3 min read
Dec 28th 2021
We use cookies to ensure that we give you the best experience on our website Close