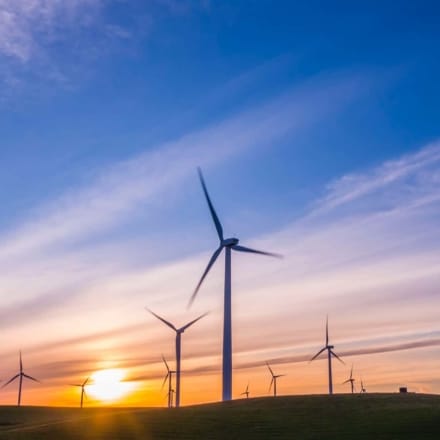 Largely due to increased wind generation which increased by 18% yoy, renewables provided a record 43% of the UK’s electricity last year, up from 37% in 2019 with wind alone providing a record 24.1%, with 13% coming from offshore and 11.1% from onshore.

Fossil fuel generation fell to a record low in 2020, providing 37.7% of electricity with gas producing 35.7% while coal fell to just 1.8%. The report highlights the fact that there were several substantial periods in 2020 when there was no coal-fired power generation in Britain including a new record of 67 days between April and June.

This steep decline in fossil fuels has been attributed, in the main, to a decrease in demand from the transport sector. Transport fuel demand fell 29% year-on-year. The demand decline was steepest in aviation, falling 60% year-on-year. Additionally, energy requirements for industrial and business use fell 6% year-on-year.

However, growth in new renewable capacity continued to slow with just 1GW added in 2020, the lowest since 2007.

The news was particularly welcome in the year that the UK is hosting the biggest international summit on climate change for years, with RenewableUK CEO Dan McGrail commenting: “It shows that this country is playing a leading role in the global energy transition, with renewables becoming the dominant source of new power generation – outstripping fossil fuels for the first year ever and setting new record highs across the board.

“It’s another significant step on the road to net zero emissions, but we need to move even faster and decarbonise the power sector by 2035.

“Today’s report by the Met Office warns that the UK is already undergoing disruptive climate change, so it’s vital that we take practical action at scale against the biggest threat that all of us face to our way of life.”

The publication comes a month after the UK Government officially brought the ban on coal-fired electricity generation forward by one year, to 1 October 2024 but, despite this growth in the use of low-carbon energy, many still feel the Government is not doing enough to prevent fossil fuel demand – and, therefore, energy-related emissions – from rebounding rapidly to pre-pandemic levels.

The Climate Change Committee (CCC) warned last month that the Government lacks a clear plan or policy to reduce emissions. While the Government has recently published the Transport Decarbonisation Plan, other expected strategy updates, including the Hydrogen Strategy and Heat and Buildings Strategy, remain outstanding at time of writing.