Sinclair Meadows, a development by not-for-profit housing provider Four Housing Group, located in South Shields, claimed the top prize at the Housing Excellence Awards on Wednesday 15 May to be named the ‘Best  New Affordable Housing Scheme’ in the UK.

The development also beat six other shortlisted projects to win the ‘Innovation’ category at the Constructing Excellence in the North East Awards. In addition, Sinclair Meadows has been awarded a spot in the top 50 affordable housing developments in a list compiled by industry magazine Inside Housing.

Although all new build housing in the UK must be carbon neutral by 2016, developments like Sinclair Meadows go even further by producing more energy than they use.

More than 500 applications were received by prospective tenants wanting to live in one of either the nine three-bedroom houses or 12 two-bedroom apartments. This number was reduced to just 21 successful applicants who before taking residency, attended a training programme to learn more about the daily tasks involved in a carbon negative lifestyle.

Dawn Keightley, group director of operations at Four Housing Group, said: “The vision from the outset was to create a social housing development that was not only affordable but would also be the first to achieve carbon negativity. This means the homes actually create more energy than they use, making Sinclair Meadows one of the most eco-friendly developments in the UK.

“Many people have invested a lot of time and effort in making Sinclair Meadows become a reality for our residents. We are thrilled with the recognition from Housing Excellence, Constructing Excellence and Inside Housing; it’s fantastic to get recognition for a job well done.” 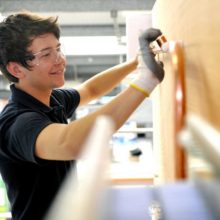