Berlin-based wind energy developer NTS are using a kite’s aerial movements to drive a generator, which in turn converts this kinetic energy into electricity.

So far the potential results have been remarkable: a simulation shows that eight kites with a combined surface area of up to 300 square metres can equate to 20 conventional 1-megawatt wind turbines. This means 24 kites could supply power to 30,000 homes.

To make its concept a reality, NTS brought in the Fraunhofer Institute for Manufacturing Engineering and Automation IPA in Stuttgart.

The project partners intend to use their new method to harness the power of strong winds at altitudes of up to 500 meters.

Joachim Montnacher, an engineer at the IPA, explains: “The kites fly at a height of 300 to 500 meters, perfectly positioned to be caught by strong winds. Cables, about 700 metres in length, tether the kites to vehicles and pull them around a circuit on rails. A generator then converts the kinetic energy of the vehicles into electricity. The control and measuring technology is positioned on the vehicles.”

Compared to conventional wind farm technology that relies on rotors, this technology offers a wide range of advantages.

“The energy yield of a kite far exceeds that of a wind turbine, whose rotor tips turn at a maximum height of 200 meters. Doubling the wind speed results in eight times the energy,” says Montnacher.

“Depending on wind conditions, eight kites with a combined surface area of up to 300 square meters can equate to 20 conventional 1-megawatt wind turbines.”

Kites do not have to struggle with the constancy of the wind the way turbines do, because the higher you go, the windier things get.

Figures for the past year show that at a height of 10 metres, there is only about a 35 percent chance of wind speeds reaching 5 metres a second, but at 500 metres that likelihood goes up to 70 percent.

This makes any number of new lowland sites viable for the production of wind energy. Another advantage is that it costs considerably less to build a system that, among other things, does not require towers each weighing hundreds of tons.

The project partners have clearly divided up responsibilities: NTS GmbH will design the kites and construct the high-altitude wind farm, and the researchers from the IPA will be in charge of developing the control and measuring technology, which includes the cable winching mechanism and cable store.

One of the jobs of the control unit is to transmit the measuring signals to the cable control and kite regulation mechanisms. A horizontal and vertical angle sensor located in each cable line and a force sensor within the cable distributor guarantee precise control of the kite’s movements as it follows either a figure-of-eight or sine-wave flight path up above.

These flight manoeuvres generate a high pulling power of up to 10 kilonewtons (kN) – meaning that a 20-square-metre kite has the capacity to pull one ton. Each vehicle is pulled by a different flight system.

At a test site in Mecklenburg-West Pomerania, IPA researchers and NTS GmbH have already been able to send a kite on its maiden voyage along a 400-meter-long straight track.

A remote control similar to those used to fly model planes was used to manually control the kite. The experts now want to reconfigure the test track making it into a loop. Computers will eventually be used to achieve fully automatic control of the kites.

“According to our simulations, we could use an NTS track running a total of 24 kites to generate 120 gigawatt hours a year (GWh/year). To put this into perspective, a 2-megawatt wind turbine produces around 4 GWh/year.

“So an NTS system could replace 30 2-megawatt turbines and supply power to around 30,000 homes,” says Guido Lütsch, managing director of NTS GmbH. After successful test flights on the demonstration track, the project partners are confident that their computer simulations will hold up in reality. The first investors are already on board. 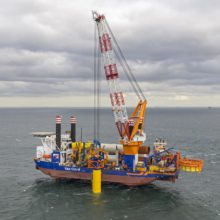